Aeration and Stripping of Volatile Gases

Water is contacted with air for two general purposes; to strip volatile components out of the water, and to expose contaminants in the water to oxygen, so that these contaminants can be oxidized. Where the processing goal is only stripping of volatile components, the equipment is typically referred to as a VOC stripper, gas stripper or methane stripper. Where the purpose is to oxidize objectionable components, the equipment is referred to as an aerator. The typical stripper and aerator are usually similar in configuration, and aerators often also serve a stripping function as well.

WETS has installed or retrofitted hundreds of aeration water treatment systems for its clients in its over-45 years history and has developed a wide variety of high-efficiency aeration and stripping processes and equipment. Our designs are highly efficient for aeration, VOC stripping and gas stripping. Our unique distributor, vessel internal components, and in-house blower designs exhibit very low-pressure loss for optimum flow distribution. 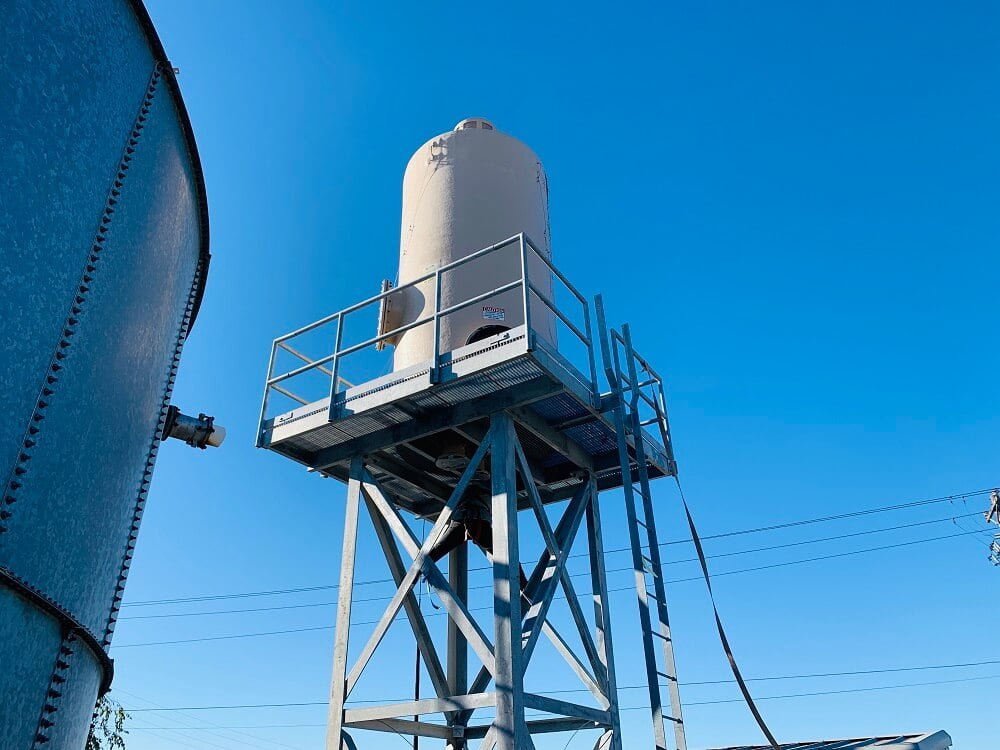 In the typical configuration for an aerator in water treatment, the aerator is elevated on a dedicated structure and treated water gravity drains into the ground storage tank (GST), sometimes through filters. This is often referred to as an Elevated Aerator. There are also designs where the aerator is on the ground and the treated water is pumped to the GST (Ground Aerator). Ground Aerators are often a client preference, where the water treating facility is near a residential community and the visual of the elevated aerator is considered undesirable.

For aerators performing an oxidation service, a gravity filtration system is often provided for solids removal downstream of the aerator, but not necessarily. Depending on the solids content, it may be permissible to forgo filtration and allow the solids to settle in the GST. In these cases, the provision would have to be made to take pump suction on the GST above the maximum anticipated build-up level.

For an aerator in water treatment plant, designs can differ in the means the air is introduced, how the water is introduced, the vessel internals and the use of cylindrical vs rectangular vessels, depending upon the service. WETS’ designs have generally been a positive draft, with air introduced by a blower, with either dumped packing or slat trays. The water is introduced by a liquid distributor of a proprietary WETS design. There is typically no sparger for the air, given the relatively low gas rates and low-pressure drop in the system. The WETS design will typically use a bed of dumped plastic packing for the contacting of the water and air.

Over time, the packing/internals of an aerator are likely to foul with bacteria and/or metal precipitates, leading to performance and operational problems. WETS has been called on for dozens of aerator rehabilitation projects. These projects typically include removal of existing packing/internals, cleaning of the interior, addition of new (typically Lanpac XL) packing, and any additional repairs to piping and blower. If you are having issues with an aerator, give a WETS professional engineer a call, and we can arrange a site visit to discuss how to best resolve the issues.

Solutions to Your Water Treatment Needs

Whether you want a new water treatment system installed, need your current one inspected and repaired, or just want a free quote, contact the WETS LLC. With years of experience in the industry, our skilled team members are trained and knowledgeable with a variety of leading water equipment and products. Our certified water purification experts are here to help.