Radon as a Water Contaminant

Radon is a naturally occurring radioactive gas formed in the radioactive decay chain for uranium in soil and rock (in this decay chain, radon itself is the immediate decay product of radium). High levels of radon can enter groundwater flowing through granite or granitic sand and gravel formations. Radon is colorless, odorless, tasteless, and chemically inert. Radon emits ionizing radiation that has been linked to lung cancer, and is considered the second leading cause of lung cancer in the US. Ingesting water that contains radon may increase the risk of internal organ cancer, primarily stomach cancer.

There are still no federally enforced drinking water standards for radon, but the EPA has proposed regulations. In the proposed standard, the radon level in water will depend on whether the state has an EPA-approved indoor radon air program (these are called Multimedia Mitigation Programs). States with such a program would have a standard of 4,000 picocuries/liter (pCi/L). States without a program would have a standard of 300 pCi/L.

If the state has not developed an indoor air program, a public water system does have the right to develop their own local indoor radon program and thereby meet the higher standard of 4,000 pCi/L.

Most of the radon in indoor air comes from soil underneath the home. However, radon gas can dissolve in groundwater. When such water is used in the home for showering, washing dishes, etc., it is sufficiently volatile to escape from the water into the air; therefore, radon in water can contribute to the health concerns in breathing radon in the air. The USEPA estimates that between 30 and 600 lung cancer deaths a year result from radon contamination of drinking water.

Some radon remains in the water; drinking water containing radon also presents a risk of developing internal organ cancers, primarily stomach cancer. However, this risk is considered smaller than the risk of developing lung cancer from radon released to air from tap water.

Radon contamination is not a concern for drinking water from surface water sources, as any radon in the water will have released into the air before reaching the consumer.

WETS uses aeration as the preferred method for removal of radon from drinking water. We usually suggest doing a pilot study to optimize the aerator sizing. Our solutions are unique for each plant as we don’t offer an off-the-shelf product. 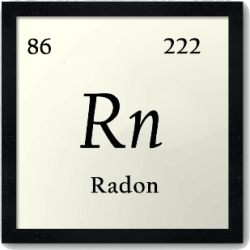 How Can We Help You With Your Radon Water Filtration In Water Treatment.