Arsenic as a Water Contaminant

Arsenic is found widely in the earth’s crust, and therefore in groundwater, in many parts of the world. It can also find its way into drinking water from commercial and industrial uses, such as pesticides. Arsenic is often associated with manganese and iron content in water, and the presence of iron will interfere with and impair the removal efficiency of arsenic, so iron and arsenic removal are typically addressed together. Arsenic content in water from a particular well can vary over time and also with the rate of draw from the well.

The MCL for arsenic in well water was lowered from 0.05 mg/L to 0.01 mg/L in 2001. This change resulted in a significantly greater number of public water systems being out of compliance, and spurred considerable research into the best means to remove arsenic. As a result, there are many technologies available for arsenic removal from water.

Arsenic in water can be found in different forms. For potable water treatment, the important distinction is between trivalent (arsenite, As+3, often called Arsenic 3) and pentavalent form (arsenate, As+5, often called Arsenic 5). Arsenite/ Arsenic 3 is difficult to remove in arsenic water treatment., and must be oxidized to Arsenate/Arsenic 5 before it can be removed. Arsenate/ Arsenic 5 has a negative charge so it can be readily removed by coagulants. About a third of soluble arsenic in well water is in the arsenite/ Arsenic 3 form in US.

This oxidation of Arsenic 3 to Arsenic 5 can occur by several different means, such as chlorine, potassium permanganate, ozone, hydrogen peroxide, and ultraviolet light.

Arsenic is removed to some extent in iron and manganese treatment plants as the arsenic has some affinity for the insoluble iron oxides, and in fact iron oxide‐coated sand has been demonstrated to be an effective adsorbent material for the removal of arsenic and other metals and metalloids from drinking water and wastewater. However, for effective arsenic removal there are a number of other factors involved (for instance, adsorption decreases with increasing pH), so testing for the particular application is typically required for design of an arsenic removal system.

Arsenic is not detectable to humans by odor or taste; it is important that the treated effluent is properly monitored to ensure proper arsenic removal.

Exposure to arsenic at high levels poses serious health effects, both chronic (long-term) and acute (short-term). The acute effects include nausea, neurological effects and fatigue. Chronic effects include potential for several types of cancer and skin discoloration. The higher the level and length of exposure, the greater the risk.

There are many technologies available for arsenic removal from water. In our applications, WETS has most typically used modified coagulation / filtration technology (popularly known as MCF) as it addresses the need to treat for iron and manganese together and is a good fit economically for many of our clients. Our pilot study will economize on the chemical dosing and also help on getting TCEQ approval. Our solutions are unique for each plant, as we don’t offer an off-the-shelf product. 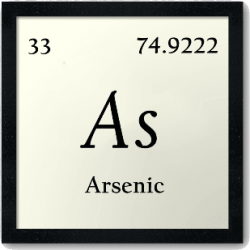 How Can We Help You With Your Iron & Manganese Removal In Water Wreatment.