Radium as a Water Contaminant

Radium is a naturally occurring radioactive element that is present in varying amounts in rocks and soils in the earth’s crust. The most common isotopes in groundwater are radium-226 and radium-228. The extent of concern on radium in groundwater is dependent on the local geology; deep bedrock aquifers used for drinking water sometimes contain levels of radium-226 and radium-228 that exceed regulatory standards. Surface water and well water from shallow aquifers typically do not have radium issues. Radium-226 results from the radioactive decay of Uranium, with the primary emission of alpha particles. Radium-228 results from the radioactive decay of thorium, with the primary emission of beta particles.

Radioactive contaminants such as radium are often referred to as radio chemicals or radionuclides.

While our bodies pass most ingested radium, a portion is absorbed and deposited in the body, in particular bone. The behavior of this absorbed radium causes health issues. Radium emits energy in the form of alpha particles (helium nuclei) and gamma rays, and will also decay to form radon gas. For radium and other radionuclides, the production of the high-energy alpha particles is the main health concern. However, the decay of radium into radon gas does present another contaminant of health concern in drinking water as well as in the air. Exposure to alpha radiation damages the surrounding cells and can increase the risk of cancer, kidney damage, and birth defects.

The radium-226 and radium-228 isotopes have the same physical and chemical properties; the removal efficiency of a treatment process will be the same for both.

EPA regulates radium under the National Primary Drinking Water Standards for radionuclides; the established MCL for radium in drinking water is 5 picocuries/liter (pCi/L) combined for radium-226 and radium-228. The MCL for the gross alpha standard is 15 pCi/L.

Radium cannot be seen, smelled, or tasted in drinking water. Only a small portion of ingested radium is absorbed in the digestive track; most is passed unchanged from the body. However, absorbed radium is deposited in the body, in particular bone (as radium has similar characteristics to calcium). This deposited radium emits alpha particles that may damage surrounding tissue, causing depression of the immune system, anemia, cataracts and fractured teeth. At high exposure levels, radium can cause bone, stomach, lung, and other cancers in humans.

The decay of radium into radon presents another contaminant of health concern in drinking water as well as in the air.

The optimum treatment technology for radium contamination depends on the water properties; for instance, pH will affect the chemical bonding of radium and therefore removal efficiencies for different treatment processes. Identification of the best treatment process by analyzing water test data is problematic; it is best to perform a pilot study.

WETS has many years of experience in treating radionuclides such as radium. Our pilot study for radium removal typically looks at ion exchange, green sand filtration, coagulation/dual filter media, and hydrous manganese oxidation filtration. Radon gas, the immediate decay product of radium, is often also a health concern where radium is present. Our proprietary aeration/filtration unit can both remove radon gas through aeration and recover radium through filtration in a single unit, saving in treatment costs and allowing for a smaller footprint for the treatment unit. 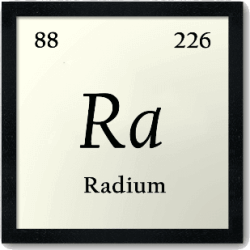 How Can We Help You With Your Radium Removal In Water Treatment.