Uranium as a Water Contaminant

Uranium is a naturally occurring radioactive element (radionuclide) that is present in varying amounts in rocks and soils in the earth’s crust. Uranium enters water by leaching from soils and rock, but can also enter the environment and groundwater from uranium processing facilities. Uranium has a demonstrated toxic effect on the human kidney, as well as the risks of cancer seen with all radionuclides. Uranium is not a stable element; it decays into radium, which in turn decays into radon gas, and radium and radon gas also have their health concerns.

USEPA is required by 1996 amendments to the SDWA (Safe Drinking Water Act) to regulate uranium in drinking water. The regulation for radionuclides was revised on Dec. 7, 2000, to include an MCL for uranium of 0.03 mg/L (30 ppb).

The concentration of uranium in drinking water depends on several factors. These includes the contact between uranium rocks and water, presence of carbon dioxide and oxygen and pH value.

EPA regulates uranium under the National Primary Drinking Water Standards for radionuclides; the established MCL for uranium in drinking water is 0.03 mg/L.

The EPA also has specific regulations to protect the groundwater and environment from contamination from uranium mill tailing sites.

Uranium can enter the body when it is inhaled, swallowed, or through cuts in the skin. Over 99% of uranium ingested in food or water is passed through the body, but a small amount of the uranium will be deposited in a person’s bones, where it can remain for years. The health concern arises from the alpha particles produced upon uranium decay. Human skin is excellent protection from uranium decay outside the body, but the alpha particles produced by internalized uranium results in radiation and chemical damage to body tissue that can lead to cancer, kidney damage, and other health problems. The level of risk depends upon the level of uranium concentration.

The optimum treatment technology for uranium contamination depends on the water properties, as water properties such as pH, and oxygen and carbon dioxide content impact the level of contamination and the chemical form of uranium in the water. Identification of the best treatment process by analyzing water test data is problematic; it is best to perform a pilot study.

WETS has many years of experience in treating radionuclides such as uranium. Our pilot study for uranium removal typically looks at ion exchange, reverse osmosis, activated alumina adsorption, and coagulation/filtration methods for treating uranium. Our solutions are unique for each plant as we do not offer an off-the-shelf product. 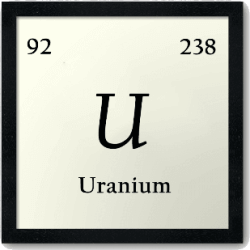 How Can We Help You With Your Uranium Removal In Water Treatment.